Because of many growers in the Corn Belt have faced a wet spring and delayed planting in June. And strange physical symptoms can occur when corn plants undergo unusually fast development early in their life. That is a period of relatively slow growth, maybe because of cool temperatures, then it is followed by rapid shift to warm conditions and rapid growth. So Corn plants in the V5 to V7 growth stage may be showing some symptoms of a giant growth spurt -- twisted whorls, yellow leaves and weakened stems.

This symptom goes by many names -- "twisted whorl," "wrapped whorl," or most comprehensively, "rapid growth syndrome." It most often occurs between the V5 and V7 growth stage. The exact cause isn't confirmed, but one hypothesis involves the "exudate," or liquid secreted by leaves. The exudate can be a little sticky, so when this happens during a period of rapid whorl development, some think that the stickiness prevents the whorl leaves from unwrapping easily.

The phenomenon occur in small patches or along the field edge -- which likely means the root system is the culprit. "Something is holding that plant back. Often it's the root -- either they're compacted or injured by insect or disease, so the plant is one growth stage behind everything else. Then -- due to good growing conditions or putting on new roots -- that plant jumps ahead and grows too fast.

Also known as "yellow flash" or "yellow top," this symptom is a direct result of twisted whorls. After the whorl unfurls, the wrapped leaves will appear light yellow for a period of time, until they are able to absorb sunlight. They can also appear wrinkled or kinked from the tight wrapping. 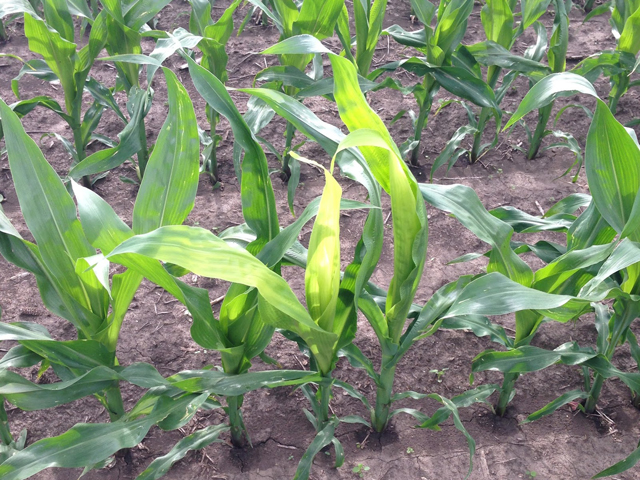 The yellow leaves are bright, easy to spot, and easily confused with other agronomic issues. ALS herbicides, in particular, can cause similar yellowing in corn plants. It can be tricky to tell the symptoms apart, but yellowing from rapid growth will be limited to the top leaves emerging from the whorl. Yellowing from ALS injury will occur where the herbicide made contact, so depending on the growth stage at application, it can be anywhere on the plant.

Meanwhile parts of the central Midwest have received heavy rainfalls, and some corn fields may have standing water, which can also cause leaf yellowing. In those cases, the yellowing will occur at the base of the plant, as it tries to remobilize nitrogen and other nutrients to the top of the canopy.

As stalks mature, a compound called lignin is deposited on the outer surface. It acts like cement within cell walls to make the stalk rigid and strong.When corn plants are young, they naturally have less lignin in their stalks, making them more fragile and easily bent.

During a period of hyper-fast plant development, often before pollination, sometimes the lignin deposition can't keep up with the stem growth. Sometimes the stalks are elongating so fast that they haven't yet formed this lignified outer stalk circumference, so they're more susceptible to strong winds.In severe cases, these plants will be susceptible to green snap or lodging until the lignin content of the stalk increases.