What color shading net works well? The common shade net is black, but after all, it's home. It's ugly to hang a black one on the balcony. In addition, there are white, green, blue and white stripes on sale, and the shading rate is also different. 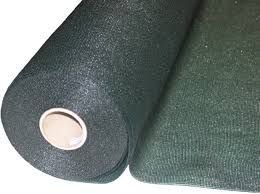 2. The function of shading net

Shading net, also known as shading net, is a new type of protective covering material for agriculture, fishery, animal husbandry, windproof, covering soil and so on. After covering in summer, it plays a role of shielding light, rain, moisturizing and cooling; after covering in winter and spring, it also has a certain role of heat preservation and humidification. Sunshade net is made of polyethylene, high density polyethylene, PE, PB, recycled materials, new materials, polyethylene propylene and other raw materials. It is treated by ultraviolet stabilizer and anti-oxidation. It has the characteristics of strong tensile force, aging resistance, corrosion resistance, radiation resistance and portability. Mainly used in vegetable, fragrant auspices, flowers, edible fungi, seedlings, medicinal materials, ginseng, Ganoderma lucidum and other crops of protective cultivation and aquatic poultry breeding, has obvious effect on improving yield.

3. Characteristic and performance of shading net:

Plants, fruit seedlings, edible fungi cultivation and all kinds of farms cooling, moisturizing, etc. At the same time, the product has heat resistance, cold resistance, easy to use, long life, low price and so on.